The editing screen requires at least 450 pixels of horizontal space. Please rotate your device or use one with a bigger screen.

Surayt is a Neo-Aramaic language originally spoken in Turabdin, a region in southeastern Turkey, traditionally inhabited by Syriac Christians. In academia, Surayt has also become known as “Turoyo”. However, the speakers themselves have not accepted this academic term. They usually call their language Surayt. This term goes back to Classical Syriac Suryå'īṯ and means “Syriac” or “the way Syrians speak”. Today in Europe, many speakers simply use the term Suryoyo for their language. 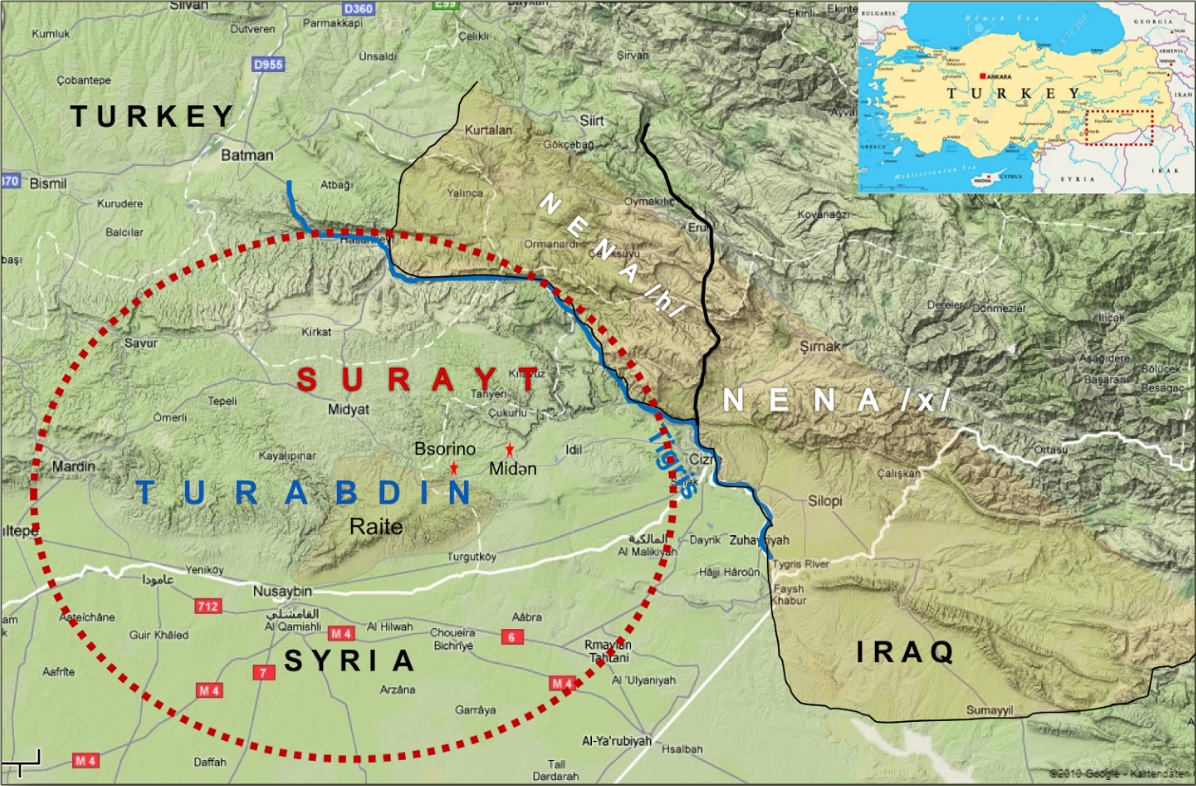 In this course, we have chosen to use the term Surayt because its speakers in Turabdin traditionally used it. It can also be used alongside the term Turoyo, which has been more in use among Western scholars.

Surayt spoken in the diaspora is not the same as any of the local dialects in Turabdin. The language presented in Šlomo Surayt is a slightly unified version of Surayt, which developed in the diaspora, and which can be considered as unique for its new context.

Today, only about 1,500 people in the area of origin in Turabdin speak Surayt. However, in the European diaspora more than 250,000 people call it their “mother tongue”. Surayt is not a dialect of Classical-Syriac (kṯobonoyo), which is still used as liturgical language in Syriac churches. Within the Neo-Aramaic languages, Surayt is classified as Eastern Neo-Aramaic, which also includes the Jewish and other Christian Neo-Aramaic dialects of Iraq and Iran.

The following table demonstrates the classification of Surayt within Neo-Aramaic languages:

The native speakers of Surayt call themselves mainly Suryoye (Sg.m Suryoyo, f. Suryayto). In Western languages, there is a dispute among different groups about naming the speaker community.  The learner can come across the same group with different names, such as Syriac, Aramaean, Assyrian and compound versions of these terms. To avoid discussions about this issue in the English version we use the term ‘Syriacs’. In other languages, we use one of the accepted common terms. We would like to emphasize that the aim of Šlomo Surayt is to offer an opportunity to everybody to learn Surayt, not to enter into discussions about the name of the people who speak or who originally spoke this language.

Until we started with our project, Surayt did not have a standardized orthography. For this project, we have developed a new orthography to be used for writing in both Syriac and Roman alphabets. Thus the writing system used in Šlomo Surayt is the result of debates and discourses, which have taken place in several colloquia and workshops since 2012 at the University of Bergen, the University of Cambridge and at the Freie Universität Berlin, as well as in the Mor Afrem Monastery in the Netherlands. Many experts, academic professionals and native speakers participated in these orthography meetings.